Welcome to our journey into the guts of The Walking Dead. What kind of journey? A philosophical, psychoanalytical and political kind. What I would like to do over the next couple months is dig thought the Walking Dead episode by episode to see what it can teach us. Thank you for following me on this journey. I look forward to reading your comments. Be forewarned: There are spoilers everywhere. Don’t forget to check out my previous post in the Philosophizing TWD series: Philosophizing The Walking Dead S1E2 Guts and Can Racism Survive The Apocalypse?

Scene
The beginning of the episode Rick is reunited with his family and recruits a group to go rescue Merle, who was left chain cuffed on the roof of a building. While a Rick is on his way to Atlanta, the women in the camp are gathered around a lake washing the camp's clothing. On the other end of the lake Shane is trying to teach Carl how to catch fish and Jacqui starts a dialog:


Jacqui: I'm beginning to question the division of labor here.
Amy: The world ended didn't you get the memo?
Carol: It is just the way it is. (TWD S1E3)

What followed was a discussion of the things they miss about the pre-zombified world. Carol makes a joke and the women laugh together. Ed notices and stumbles down the hill. Andrea bothered by Ed's hovering presence confronts him and suggest that he do his own laundry. Ed gestures to Carol to come with him. Andrea interjects and advocates for her. Ed grabs Carol by her arm and begins pulling her up the hill. The women protest and follow after. He slaps Carol, and the woman attacks him. Shane runs in and grabs Ed pulls him away and tosses him on the ground and pummels his face. The group of women watches the scene distraught.

Analysis
Last week between classes I had an interesting discussion with two of co-conspirators of my social work studies. I forget how we got on to the subject. Someone mentioned the film Fight Club and I asked, "Could you picture Fight Club with women?" No, they responded. I asked or they asked (I forget);What makes it difficult to imagine Fight Club with women? My thought was that men and woman think about and act out respect differently. 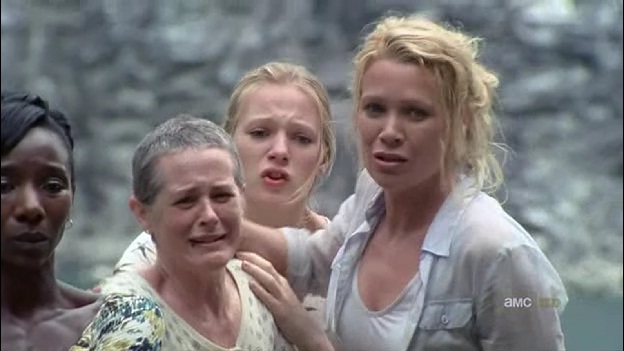 I think that that men and women think about and act out respect differently. Men think about respect in a more physical/kinetic way (yet not entirely free from language), and women think about respect in terms of dialog (though not entirely excluding the physical). The story I used to illustrate my point was my experiences around other men solving problems in boot camp. When two dudes had a verbal dispute that reached a certain threshold, they would duke it out. After a fight, one of two things would happen; they would pat each other on the back (like when Daryl and Rick duke it out in the being of this episode), or a clear alpha male would be distinguished between the two and the loser accepted a submissive role. On the other hand, female disputes are near entirely all verbal, rarely reaching fisticuffs. If two females have a dispute they avoid confronting each other, and seek support. After collecting co-conspirators; one of two things happen: they would viscerally duke it out or whoever collected the most supporters would leverage pressure against the weaker group or individual until they submitted. This pressure boxes a person in such a way where the intensity of the conflict did not reach a fist fight, but maintain ongoing tension to break down the spirit of the weaker person or groups keeping the person or group in constant check.


The group of woman cleaning clothes while criticizing the hetornormative hierarchy also reinforce it by not act upon their frustration. The criticism serves to reinforce the social norms by providing equal weight to all perspectives during the discussion. No one is told that they are wrong or expected to justify their claims. So, while Jacqui and Andrea are scratching at the feminist dialectic challenging the hetronormative hierarchy they do not have intentions to move beyond whining. In a very real way their conversation “is what it is” and is nothing more. Their words are just words. The problem in isolating how you believe the world should be from how others think the world should be is that by avoiding confrontation a set of common values in which to act collectively is foreclosed. Without tension there can be no change. 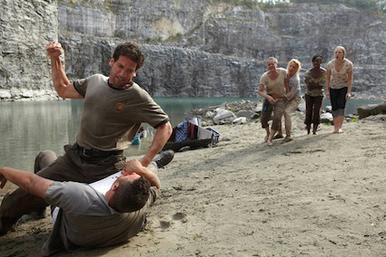 There are two disgusting acts of advocacy I would like to chainsaw into; the first is Andrea is speaking for and against the wishes of Carol, and the second is Shane beating Ed’s face bloody. What gives Andrea the audacity to define Carol’s reality for her? Nothing. Let me explain. I am not suggesting that Andrea should have done nothing and supported the continuance of the cycle of violence between Ed and Carol. I am arguing that the route that Andrea took was emotionally crippling for Carol. We learn from neuroscience that when we solve people’s problems for them it sabotages their capacity, develop the neuro-pathways that would allow them to solve problems for themselves. On a more insidious level when Shane comes and bashes Ed's skull in he undermines the group's (that had just shifted from talk to action) ability to solve a problem on their own.


In community organizing theory, there are three types of people in the world; selfish, selfless and self-interested. A selfless person is a person who denies the self in relation to others. In this scenario Carol plays the role of a selfless person who is seeking to minimize the conflict for others, while denying what is in her own interest. Shane is a selfish person who is only concerned about himself. On the one hand, he is trying to maintain order in the camp, which ultimately have to do with his own personal survival, and he is seeking to displace his anger from being told off by Lori in a previous scene. Andrea is also a selfish person because standing up to Ed was more about her sense of right and wrong than what was in Carol's interest. Although there was a moment when they became self-interested people in order to fend off Ed's assault. In this brief moment they were acting out of a collective interest to fend off a mutual threat.

I would argue that the disgusted looks on the women faces are not rooted in the shock of the violence Shane brought to them, but in the emotionally crippling moment where he stole their power to solve a problem on their own.