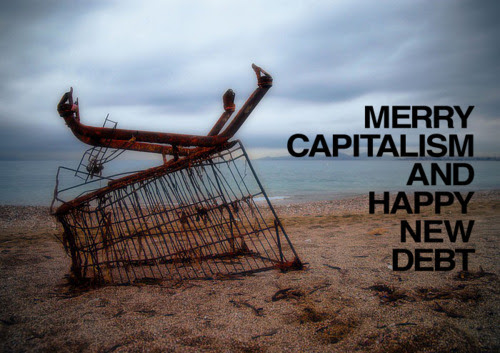 Black Christmas plays with the idea of family. Family for most of is the safest place we know. We grow up with parents or guardians that support our normative development, while seeking to help us become adults who can integrate into the adult realm of capitalism. We are taught to treasure, moral values that help support the idea that the pursuit of money is riveted into our sense of self-worth.

Capitalist holidays cloaked in the mire of Christianity solidify this myth by teaching us to equate our personal self-worth and relationships economically. We buy stuff to demonstrate our affection for others. Our emotional relationships demonstrated through economic relationships. The Santa Claus mythos is our first training in commodity fetishism. Santa has a list of good and bad children. Our moral labor is quantified to gifts or coal. Our very behavior becomes labor before a business cuts us a check. In our families we learn to sell our behavior. We work very hard at becoming good children because it comes with a Christmas bonus. In Black Christmas Billy's introduction to the values are of capitalism is disrupted by his mother who is erratic about her valuation of his behavior. She purchases him presents every year, yet locks him in the attic for the rest of the year. Billy grows up dispossessed and dislocated from the norming and countering influences of his peers. Locked in the attic, he begins to develop new values inscribed outside the economic sphere of Christmas.


Lauren Hanon: Christmas is more about warding off evil spirits than Halloween. What Christmas [poop] in this room resembles anything Christian, huh? It's all neo-pagan magic. Christmas tree, a magical rite ensuring the return of the crops. The mistletoe is nothing but a conception charm. Fifth century Christians jacked a Roman Winter Festival - twelve days in December when the nights were long and the Earth was ruled by the demons of chaos. And [flipping] Santa Claus? This fat voyeur that watches you all year long to make sure you live up to his standards of decency before breaking into your house. And that is different from what Billy did, how?

Peeking through holes in the walls, he watches a mother who has rejected him distribute the affectation that he feels should have been allocated to him. Jealous, and dislocated, he begins reformulating what is and is not family. Family gets redefined. He breaks free from his imprisonment and attacks his sister-daughter telling his mother that “She is now my family.” Decades go by and Billy is still living in the attic and crawl spaces. Over the years, Billy views a strange scene of women, describing themselves as family via the bonds of the sorority. Sisterhood becomes generalized.

Sororities exist to act as a transitional family for women entering college. Dislocated from her family for the first time in her life women enter into supportive relationships with each other. Ideally, sororities act as a kind of feminine sociopolitical learning community where women learn to be independent, learn how to distinguish between suitable dating partners, strengthen collective social capital, and become independent women with bourgeois values that are ready to navigate the social terrain of upper class adulthood or become wives and mothers. Sororities, at least in the case of this film, are provided with a house mother. She acts as second mother who becomes the corrective influence against the values the women learn in college. She reminded them to make good choices and avoid foul language.

After Kelli catches Kyle in cheating on her with another sorority sister. Kyle rants an all too accurate gentrification analysis. He grew up in the neighborhood, he played on the streets in front of this house, and had a very real lower-middle class fear of the home and the people who lived in it. Kyle roots his polemic in the guts and a pile of sexist working class pride. On the one hand, he has the audacity to date out of his class with one of the sorority women, and on the other he shows the misogynistic kernel of his being. Remember of course it is Kyle, who in the very beginning of the film who seeks to counter Kelli's understanding of family. She explains to Kyle that she is a sorority sister and is obligated to spend time with her family. Kyle takes this statement as a cut to his social status in relation to her, and feebly murmurs to her that, “I'm your family.”

One last point about unicorns. There is a flipping weird scene where one of the more awkward sorority sisters, who also doubles as a red herring, hands Kelli a gift. Nervously, Kelli unwraps the gift and finds a glass unicorn head that of course gets used as a stabbing device later in the film. The rationale that the weird girl provides for the choice of gift is, “I know you like the bible and stuff.” This line is a trip. Simultaneously, the bible justification echoes in two directions at once. First, it asserts Kelli as the purified and ripe to be the virginal and morally pure final girls, and it pokes a hole in the relevance of the bible role in the capitalist tradition of Christmas. Zizek argues:

According to a well-known anthropological anecdote, the "primitives" to whom one attributed certain "superstitious beliefs," (that they descend from a fish or from a bird, for example), when directly asked about these beliefs, answered "Of course not - we're not that stupid! But I was told that some of our ancestors effectively did believe that..." - in short, they transferred their belief onto another. Are we not doing the same with our children: we go through the ritual of Santa Claus, since our children (are supposed to) believe in it and we do not want to disappoint them; they pretend to believe not to disappoint us, our belief in their naivety (and to get the presents, of course), etc. And, furthermore, is this need to find another subject who "really believes," also not that which propels us in our need to stigmatize the Other as a (religious or ethnic) fundamentalist"? In an uncanny way, some beliefs always seem to function "at a distance": it is always ANOTHER who believes, and this other who directly believes need not exist for the belief to be operative - it is enough precisely to presuppose its existence, i.e., to believe in that there is someone who really believes. (Source: Slavoj Zizek)