Philosophizing The Walking Dead S1E2 Guts and Can Racism Survive The Apocalypse?

By SquidXIII - February 25, 2014
Welcome to our journey into the guts of The Walking Dead. What kind of journey? A philosophical, psychoanalytical and political kind. What I would like to do over the next couple months is dig thought the Walking Dead episode by episode to see what it can teach us. Thank you for following me on this journey. I look forward to reading your comments. Be forewarned: There are spoilers everywhere. Don’t forget to check out my previous post in the Philosophizing TWD series: Philosophizing The Walking Dead: S1E1 Day's Gone Bye, Bromance and Marriage 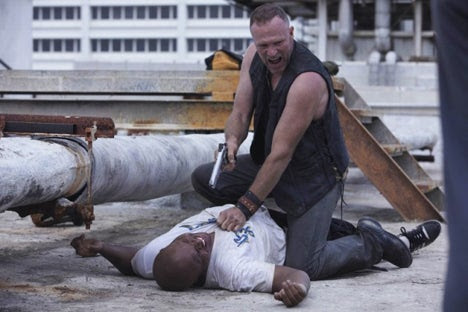 Days Gone By left Rick trapped in a tank in Atlanta, Georgia. Where he meets a new friend (Glenn) via the tanks radio. Taking Glenn's suggestion, Rick makes a run for it and meets Glenn in an alleyway. A hysterical Andrea greets him with a gun as soon as Rick arrives safely inside an abandoned store. Rick smooth talks his way into the group and wins over their tentative trust. On the Roof, Rick and the gang come upon Merle who is shooting at zombies stumbling through the streets. When Merle is confronted by the gang, they question his motivation, and Merle goes nutty slinging racial slurs and attacks everyone. After Rick recovers from being knocked to the ground, he confronts Merle.


Merle: Who the hell are you?
Rick: Officer Friendly.... Look here Merle things are different now. There are no [n-bombs] any more. There are no dumb as shit inbred white trash fools either. Only dark meat and white meat. There is us and the dead. We survive this by pulling together not apart.
Merle: Screw you man.
Rick: I can see you make a habit of missing the point.
Merle: Yea well. Screw you twice.
Rick: You ought to be polite to the man with the guy. Only common sense.
Merle: You, you are a cop.
Rick: All I am anymore is a man looking for his wife and son. Anybody who gets in the way of that is going to lose. (TWD S1E2) 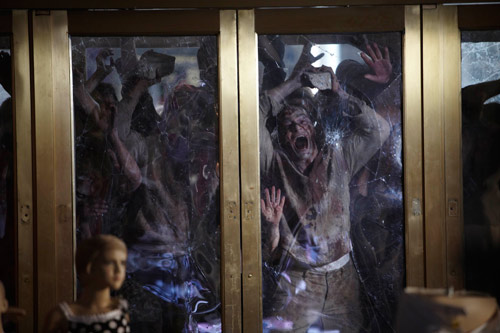 The question that came to my mind: does racism exist during an apocalypse? Let's start by trying what Rick refers to when he mentions racism. When the gang finds Merle on the roof, taking pot shots at zombies, Merle's reaction is to think in terms of authority. T-Dog goes after him about being an idiot, but Merle responds in terms authority. Why? Racism structures Merle relativity in such a way that he interprets T-dogs confrontational tone as an attack not on his intelligence but his status. Merle notices that the group on the roof aren't taking his side, he seeks to gain verification of his status. He attacks T-Dog, and forces the group to "vote" for his leadership. Why does Merle require the group to verify his imposed superiority? Because racism is a relation of authority. In order for Merle to maintain a cohesive ego, he needs the social support of the group.

Luckily, Rick saves the day and handcuffs him to a pipe. Ricks assertion is that marginalized and dominate social groups do not exist, that we all unified by what we have on the inside; our chewy brains. Of course, there is a problem here, not all of society is located in organized society. Part of what society does is create subjectivies. Racists are churned out of our racist institutions; school and family. So, while Rick may be able to organize the group around their collective self-interests, he is missing part of the picture. Rick's words remind me of something St. Paul said.


In other "particularistic" religions (and even in Islam, in spite of its global expansionism), there is a place for others, they are tolerated, even if they are condescendingly looked upon. The Christian motto "All men are brothers," however, means ALSO that "Those who are not my brothers ARE NOT MEN." Christians usually praise themselves for overcoming the Jewish exclusivist notion of the Chosen People and encompassing the entire humanity - the catch is here that, in their very insistence that they are the Chosen People with the privileged direct link to God, Jews accept the humanity other people who celebrate their false gods, while the Christian universalism tendentially excludes non-believers from the very universality of the humankind. (Zizek, 2014) 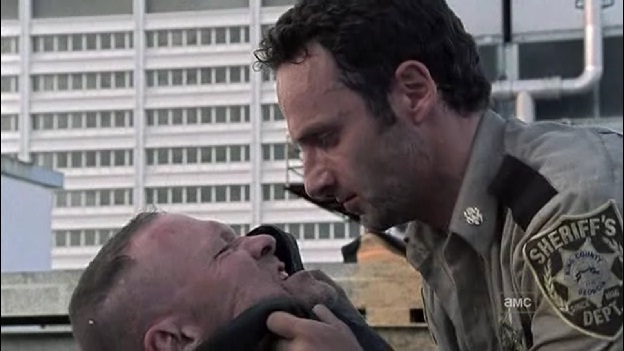 What kind of connection is Rick's implying by paraphrasing of St. Paul? A mob of flesh eating zombies is hardly Christ like (haha or is it?) I mean the part of us that is left craving for zombies is hardly the most meaningful part. It appears the metaphors have been foreclosed. Let me explain. During February heart shaped cards, boxes of candy and all matter of heart shaped things are bought and given to people all over the country. What is a heart? A fleshy meat valve. The symbolism is pure fictitious, yet zillions of people repeat the Valentine’s Day rituals as if the not actually heart shaped hearts had some solidified social meaning. The same applies to racism. Rick is correct, we are just a bag of guts, and this meaningless grounds the post-apocalyptic community. Rick on the other hand is like Sisyphus, who still pushes his rock uphill even though everything is absurd. Does racism still exist at the end of the world? Yes and no. While racism has been robbed of its social support, the capacity for racism to rebuild it's authority because people are more willing to democratically support a violent dictator then fight back.

Check out the next article in this series: Philosophizing The Walking Dead S1E3 Tell It To The Frogs And The Failure Of Advocacy