The Resolution (2012) and the Intervention of the Real.

The Resolution is a film about the intervention of the real. Michael and Chris are friends. Chris has a methamphetamine addiction. Fed up with Chris's addition, Michael decides to force him to go quit cold turkey by handcuffing him to a pipe. The home that Chris is squatting in is located in the middle of nowhere on a native American reservation. Standard enough plot, but the movie is filled with weirdness. Resolution uses weirdness to materialized trauma. By injecting random elements into the plot the viewer is forced into the traumatic and changing relationship between two friends.

Let us begin by defining trauma and interrogating its means of operation. Trauma can be looked at on a spectrum. At the low intensity side, for example, think about walking into a classroom that you frequently weekly and after several months when you walk into the classroom and the desks are rearranged. When entering a room that is not like how you remember it. There is a very brief moment in which your reality does not make sense to you. The feeling of weirdness is a symptom of trauma. It is as if you feel disrespected because someone fiddled with your reality. On the high intensive end of trauma, for example, think about soldiers riding in a convoy when all of a sudden and IED explodes. Reality suddenly becomes something radically differentiated from the past. You are not who you were nor is the world. A soldier's training may kick in and he may instantly recognize the situation for what it is and provide adaptive strategies to interpret the situation and acting on it. But, once the intensity of the even or trauma sets in clarity is lost, and the mind seeks to fragment between competing and sometimes incoherent narratives.

Stories are what we use to protect our self from reality. Chris's addiction to meth, is an adaptation to narrative incoherence. The addiction has driven his friends away, pushed him to isolate himself, and incorporate the addiction into point of a meaning constitution for who he knows himself to be. Without friends or others to challenge his self-image Chris is free to avoid confronting the reality of his life. Forced into an existential crisis when he learns his wife is pregnant, Michael reflects on his life. Not wanting to be the of father that abandon his friends Michael re-codes his role in Chris's life as a vigilante social worker bent on curing his vice. Zizek argues


When we think we really know a close friend or relative, it often happens that, all of a sudden, this person does something - utters an unexpectedly vulgar or cruel remark, makes an obscene gesture, casts a cold indifferent glance where compassion was expected - making us aware that we do not really know him; we become suddenly aware that there is a total stranger in front of us. (Zizek, 1997)

Is this not Chris's immediate reaction after being handcuffed to a pipe? He was living his life in floating from one drug stupor to the next, when all of a sudden his mild manner friend forcefully interjects himself into his life. Michael's arrival, here, destabilizes what Christ knew his relationship to be with Michael. Michael does not hide the fact that that shaking Chris from hermit/isolationist self-identification is his intent. What Michael take's from Chris is not only his ability to get high, but his ability to continue being who he was. What is interesting is Michael is willing to break into Chris's symbolic universe and rob him of the only thing that give significance to his life in order to shift his universe of meaning in order to address his guilt for letting his friend descent into addiction. 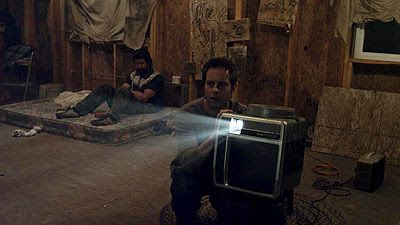 At the same time another force is trying to break into Chris's narrative. Things are literally being dropped into the plot by unseen forces. A woman appears tapping at the window. Objects appear out of thin air and drop to the ground. Chris weaves these events into the plot via rationalizations. The crazy woman must be from the new age clinic nearby. Unexplained noises are just the wind. Later, Michael finds strange photos, and a video tape with footage of an early scene between Chris and Michael. This is a pivotal moment where Michael shifts from being a guy helping his friend to a guy trapped in another story. It is as if the movie treating Michael's desire to help as an addiction, which needs an intervention in and of itself. It is as if the mysterious forced in the movie recognize Michael's narcissistic desire to force help on Chris as a sin greater than addiction. Zizek argues


What precedes fantasy is not reality but a hole in reality, its point of impossibility filled in with fantasy. (Zizek, 1997)

What is uniquely creepy about The Intervention is the film's ability to purposely confuse the viewer in such a way that still maintains a story that makes enough sense to follow but not to understand. What story is the movie telling us? Yes, there are two guys in a cabin and one is seeking to help the other overcome his addiction. But there's another layer that is not so obvious. Let us saw at the scene where Chis wakes up to knife crashing to the wood floor and a carving of two people like figures on the wall. Three immediate associations can be made; there is a connection between the two men in the cabin, and there is a connection between the drawings in the cave, and the man found sleeping in the cave may have been the person to carve both drawings. But the camera was rolling the whole time, and we, the viewers, were witness to the fact that there was no one in the room other than the two men. No doors were heard opening or closing.