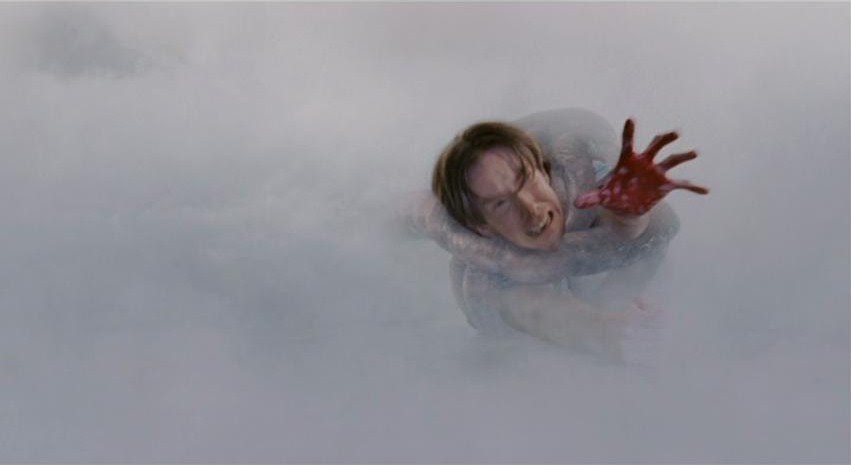 The Mist is a complex movie with a lot of moving parts. David, our hero, is an artist and husband living in a small mountain town with his wife and child. Suddenly, a storm breaks. The next morning the family wakes up to find the neighbor's tree crashed into the boathouse. Needing supplies, David makes his way to the grocery store just before the mysterious mist appears. What is the Mist? The film provides no answer. Right away we are kept at arm’s length from the truth. Breaking the confused, wondering of the consumers in the store, man covered in blood is running away from the Mist towards the Grocery store.

The reasonable people of Little Rock aren't buying it. An older guy theorizes that the Mist is a terrorist attack. Mrs. Carmody, our faithful representative of the religious right, theologizes the Mist. Brent, the politician, begins debating solutions. The three soldiers hide in silence. As the commotion to articulate the Mist heats up, David begins to explore the grocery store. Finding that the generator is sucking in the Mist from the outside, he turns off the generator making the light go out in the store. A group of three men join David in the back of the store. Masculinity overwhelms the three men, the compulsion fix the problem kicks into full gear.

David is immediately attacked for intellectualizing the problem. Thinking rather than immediately fixing is against the masculine code. David audacity to suggest that they should have a discussion before acting, forecloses the three men's capacity to participate. This is the verbal judo of the impatient reactionary to shut down the thinker. Here we enter the beating heart of masculinity. If a man cannot find a place for himself in the dialog as an equal, he undermines it and then holds people to his standard. There is a sense in which, David was talking to the three men in a way that they would not fit into the conversation. He was talking to them at an intellectual level they could not participate in. David's poor use of situational awareness and emotional intelligence push potential collaborators away rather than win them over.

David’s failure as a leader resides in his inability to win people over to his perspective the only people that side with David are people who don't need to be convinced, those that already shared his perspective. While David is a pragmatist, his lack of vision prevents him from creating a vision that people can buy into. In a very real sense, Mrs. Carmody excels at vision painting in a way David is not able to. She can translate the event of the Mist into a ready-made and likable narrative that is instantly familiar to those trapped in the grocery store. Even though her version of the translation of events is not the most likable story at the beginning, it gains credibility via its clarity compared to the competing options.
Let's take a look at the initial competing narratives:


Biblical end of the world:

Mrs. Carmody: The end of times has come. Not in flames, but in mist.

Brent Norton: Now listen people. We are experiencing some kind of disaster. I don't know whether it's man-made or natural, but I do know that it's definitely not supernatural. Or biblical. And no offense Mrs. Carmody, but the only way we're going to help ourselves is to seek rescue. We're going out.

David Drayton: Want another reason to get the hell out of here? I'll give you the best one: her. Mrs. Carmody. Our very own Jim Jones. I'd like to leave before people start drinking the Kool-Aid.

Ollie: We have to tell them. The people in the market. We have to stop them from going outside.
David Drayton: They won't believe us.
Ollie: They have to.
David Drayton: I'm not sure I believe it, and I was here. What we saw was impossible. You know that, don't you? What do we say? How do we... convince them? Ollie, what the hell were those tentacles even attached to? 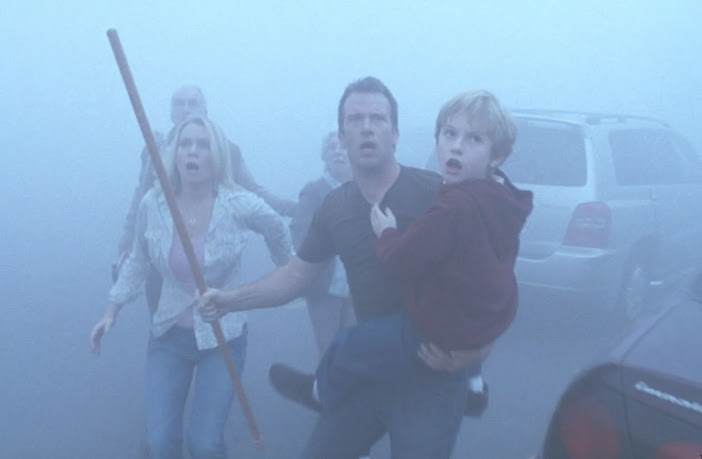 Pessimistic Pragmatic Reactionarism is David's understanding of the Mist. The view is based on the direct interaction with a given event via thought. For example, David experiences the tentacles pulling the kid into the Mist, and devises a plan of action, then brings it up for debate in order to gain acceptance. In other words, lets talk about what happened and figure out what to do. The strategizing discussion moves towards a plan of seeking to pull in others in order to gain support and widen the support for pragmatic interpretation of events. But they build this plan of action out of a pessimistic view of human nature. Appealing to logical thought, belief becomes a moot point. You can see it in David's face when he explains the tentacles to Brent that he doesn't expect to be believed. The pessimistic view is what prevented him from gaining support. If he went into the conversation, understanding that he needed others not just to buy into his logic, but also belief in him and his vision he would have had the capacity to influence Brent to his narrative. Brent doesn't buy into this, sensing the group's pessimism, he feels like they are playing a joke on him.

The trap we must avoid falling into the concept that David presents an objective perspective of the Mist that is free form Ideology. David is presenting the educated white male ideology. The ideology is wrapped in the idea that an objective perspective is free from political orientation (or believes about how the world is and should be). As if David's interpretation that leads to the plans he makes isn't wrapped up in the brutal American exceptionalism. There is a sense in which the Mist that hovers over David's narrative that blocks us from understanding his ruthlessly selfish desire to survive. Let's not be disillusioned about David, while he is the hero of the journey is only really out to protect himself and his child. In this chauvinism David's narrative fails. If David could articulate the ideological undercarriage of his perspective, it would sound something like “The mist is dangerous to me and mine. I need to do something. I need to use the surrounding people to support the survival of myself and my kid.” Yes, the creed of a noble father, but a terrible perspective to take if you need the help of others.

The ultimate failure of David's narrative happens at the very end of the movie. If you are just pragmatic and don't seek to interpret events into a vision you are left with hopes. If David had a narrative of hope, based on a less pessimistic view of human nature, he would have been able to have painted a likable vision that may have led to a more hopeful ending. What we are left with is the clear message that the ultimate result of the pragmatism combined with a pessimistic view of human nature is a failure to dream of an alternative world.
The people trapped in the grocery store during the Mist reminded me of civilians that take shelter in a building during a United States sponsored drone strike (Not to exclude the fact that other countries use drones, but the US made it the popular solution to solving foreign policy disagreements, and maintaining global hegemony. I'm just saying.) Khalid Raheem described the experience of Drone Strikes in his community: 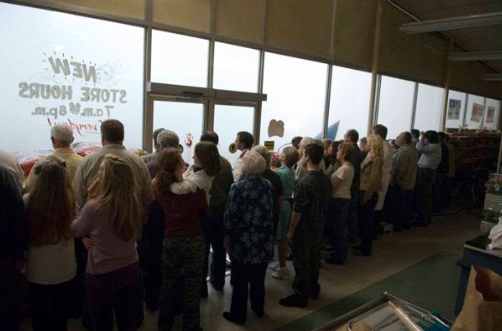 “We did not know that America existed. We did not know what its geographical location was, how its government operated, what its government was like, until America invaded Iraq and Afghanistan. We do know that Americans supported the Taliban in our area, North Waziristan, to fight off the Soviets. But [now with] the Soviets divided and broken . . . we have become victims of Americans. We don’t know how they treat their citizens or anything about them. All we know is that they used to support us, and now they don’t. . . . [W]e didn’t know how they treated a common man. Now we know how they treat a common man, what they’re doing to us.” (Living Under Drones, 2014)