Interrogating Louis Althusser's On the Reproduction of Capitalism: Ideology and the State Apparatuses

Louis Althusser is an oddity. On the one hand, he is a brilliant mind who struggled with his comrades for a better world in a 1960's France, and created the theory of the Ideological State Apparatus. On the other hand, in a fit of a madness he strangled his wife to death. Nevertheless, I will not take the shady route and condemn Althusser's writings because he was mad. Like other philosopher's, I'm thinking about Nietzsche, madness was required for greatness.

Althusser is one of my favorite philosophers I have read the least. Luckily, I got my hands on a copy of On the Reproduction of Capitalism: Ideology and Ideology State Apparatuses. I found the book helpful for me to get a better grip on a shorter/condensed text called Ideology and State Apparatuses: Notes towards and Investigation. I found the former document more welcoming to new readers than the second one.
Are the ideas that Althusser presents in On the Reproduction of Capitalism useful for us today? The book begins with an investigation into what is and what is not philosophy. Althusser argues that philosophy has become hijacked by common sense. If everyone has a philosophy, then there is no philosophy proper. No room for the philosopher. The best example of this is the insidious series of pseudo philosophy text the philosophy of the Simpsons, or True Blood or Hunger Games. This dislocating of philosophy from critical theory robs philosophy of is the ability to be dangerous. Althusser makes the case that this common sense philosophy simply isn't philosophy at all. Althusser argues:


What is essential, for the moment, is to see clearly that common-sense philosophy to which the very day expression refers should not be confused with philosophy in the strong sense which may or may not disseminate or, rather, be disseminated among the broad mass of the people. When, today, we encounter philosophical elements in the popular conceptions of the masses, we have to take this dissemination into account. Unless we do, we may mistake Philosophical elements in the strong sense that have been 'inoculated' into the masses as a result of the union of Marxist theories and workers' movement for spontaneous mass conscious. (Althusser, 2014)

Althusser is drawing a line in the sand. The kind of philosophy, he is doing is not of the likes of books like Philosophy of the Matrix or Sopranos. What he calls us to recognize is that these pop philosophies are a de-radicalized philosophy. A way to spoon feed the philosophy in way that is purely an intellectual pursuit, rather than a theory to turn into Praxis. Althusser is taking this corrupted philosophy by showing apparatuses and how they propel these ideological formations to create and re-create our conditions of oppression.
Athusser’s hammers home this point with three concepts; the repressive state apparatus, the ideological state apparatus and ideology. Let’s start on the macro level. The repressive state apparatus is the overarching dominate group that struggles to maintain its control, and reproduce is conditions of dominance. The Ideological State apparatuses are institutions that work independently and sometimes collaboratively to reproduce themselves and the subjectivities that maintain them. In other words, a school like a prison, not only educates children but creates students. What does it mean to be subjectivized from a child to a student, or a person to a convict?

At this point, Athusser introduces us to the concept of interpellation. Interpellation is an individual's response to the call of another or system of others. The example that Athusser has used is when a dude is walking down the street, and from behind a police person calls, “hey you.” Before the dude turns around he is caught in the call of the other. He consciously and unconsciously realizes himself in the subjection of the other. Now where the ideology state apparatuses come into play is when the dude realizes that he is being hailed by a police. An individual police person is never just an isolated microcosm, but a character in an ideological apparatus. So, when the dude is caught in the hailing of the police officer, he is also caught in a system of thought that always-already has a symbolic place allocated for the dude. 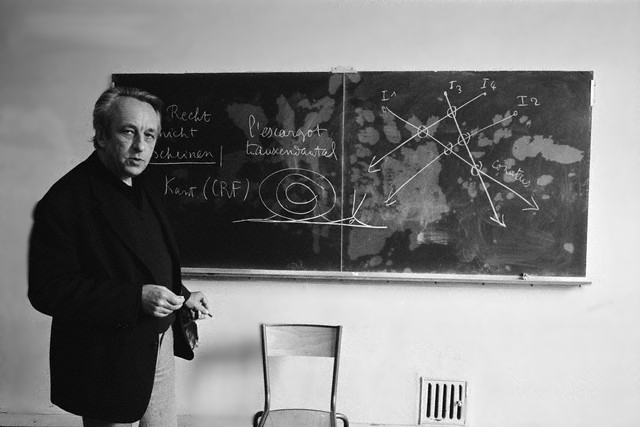 Let’s saw into the concepts of ideology with regard to Ideological State Apparatus. For example, a school. A school is full of little things that interpellate children to students. There are rules written on classroom walls. There are legislative and punitive systems. Posters on the wall that hail students towards intellectualism and patriotism. Classrooms are structured like sanctuaries in a church. Students sit on one side. A teacher stands on the other side. The Teacher is the knower, and the student is the learner. What happens here is that an Ideological State Apparatus is a complex system of these little subjectivizing forces which constantly hail a child towards a student. As Zizek argues:

to quote Shakespeare's Juliet: "Why am I that name?" There is a truth in the wordplay between "hysteria" and "historia": the subject's symbolic identity is always historically determined, dependent upon a specific ideological constellation. We are dealing here with what Louis Althusser called "ideological interpellation": the symbolic identity conferred on us is the result of the way the ruling ideology "interpellates" us – as citizens, democrats or Christians. Hysteria emerges when a subject starts to question or to feel discomfort in his or her symbolic identity: "You say I am your beloved – what is there in me that makes me that? What do you see in me that causes you to desire me in that way?" (Zizek, (2014))