Night Of The Living Dead (1990), 90's Masculine-Chicks and Post-Racial Delusions 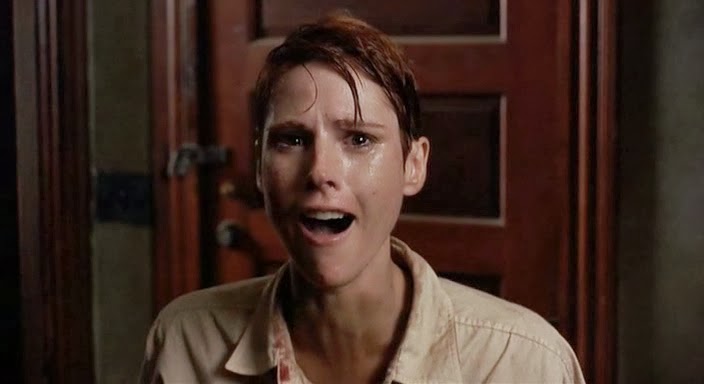 The first film that scared me was Night of the Living Dead (1990). I was a super little monster and I remember flipping between channels on TV and caught the scene where the daughter is walking towards her mother for a snack. It paralyzed me. I couldn't manage to flip the channel until the scene was over. What struck me was the sharp contrast between the little girls white dress and the blood spatters. Afterwards, the scene stuck in my head. I didn't find out the title of the film until years later. By that time I had watch the original several times and was hooked on zombies. There was a theme that bugged me in the original- Barbara's hysteria and how it played off the sexist idea of a woman who became so nuts when confronted with "guy stuff" that they become useless. The opposite presented in the 90’s remake. In the original Barbara’s brother starts the film teasing her. Although, Barbara is obviously annoyed by this, I never got the sense that she hated the guy. Yet, in the remake the tone of the teasing and Barbara’s response is more visceral and hateful. This marks a significant tonal shift between the two films

Slavjo Zizek argues in Living in the End times that “one of the best ways to detect shifts in the ideological constellation is to compare consecutive remakes of the same story.”(p.61) So, what changed between the original and remake and why? Lets take a look at the endings of the two films. As we all remember the original ended tragically with a bullet to Ben’s head. In the remake, the conflict over the basement  Ben and Harry never gets resolved, and when Ben makes the gas run with the young couple (who for some reason think using a gun is the best way to get a lock of a gas pump) set themselves on fire. When Ben’s return the house, Harry has wrestled the gun from Barbara and locked Ben out of the house. When Ben finally gets into the house Harry and Ben engage in a shootout wounding each other. By the end of the film Ben and Harry are dead, and Barbara has overcome her hysteria to rise to the status of the Final Girl. What does this say about the kind of culture that this movie was designed for? By the 90's the civil rights movement (and most movements in general) were rendered completed, feminists burnt their bras and reinforced , the Berlin wall fell, and the idea of the Final Girl and the masculine-chick had become a dominate motif in horror film. 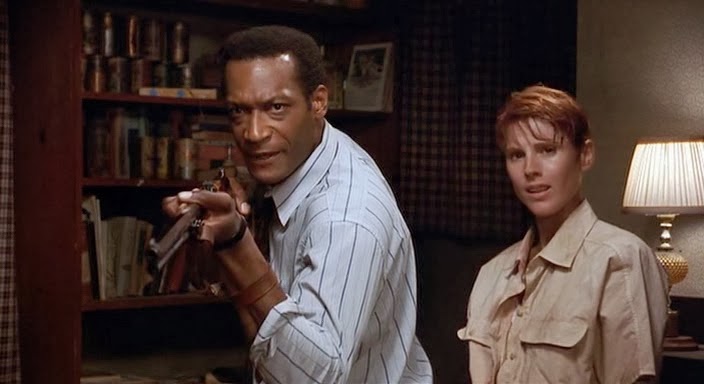 90's audiences were seeking a film that appealed to Regan-ite sensibilities. A female protagonist that gets a little fluttery by scary zombies but eventually pulled herself together to become a team player. I’m reminded of the scene where everyone is working to board up the windows, and Ben and Harry are going at it about their fight for power, and Barbara suggests that zombies are slow they could make a run for it. Ben tries to call her down, and one of the other cast members makes some comment like, “Are you crazy?” The commentary here is raises to the forefront the notion of a post-racial universe but not a post-sexist universe. No matter how manly the a chick becomes she can not have equal say when decisions are being made.
Feminism film criticism horror Night of the Living Dead Slavjo Zizek Zombies