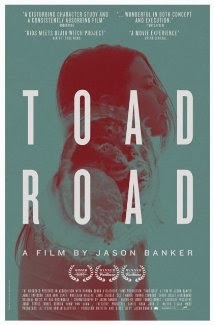 Toad Road is an artsy boy meets girl, girl convinces boy to do something dangerous (and stupid), girl disappears, boy mentally breaks story. The boy is James and the girl is Sara. James is an upper middle class 20 something who is economically and socially lost in a community of drug users. The story is told from James's perspective as he adjusts to Sara's transformation from straight edge to drug experimenter to her disappearance. Periodically, through the film he meets with a therapist via his father's ultimatum that he attend therapy or he will stop paying James's rent.

Toad Road begins when James and Sara meet. In a drugged haze, James tells Sara about a mysterious urban myth where if one drops acid and walks on Toad Road and passes through a series of gates one can travel to hell. Sara becomes obsessed with the story and pushes on James to take her on this journey to hell. But James is falling in love and would rather commit to a relationship with Sara. He suggests that they should runaway (and away from their circle of drug using friends) together begin a life in the real world. The couple decides to to have one last adventure - a romantic walk to hell. But the walk did not go according to plan and Sara evaporates as she passes through a wiggily shiny wall of stuff. James becomes unconscious and wakes up, hours later, face down in the dirt. The film implies at this point that James has blacked out for at least a month. His friends and family are curious about where he has been. The police suspect him in Sara's disappearance. As James is reconnecting with family the film cuts to short shots of Sara James covered in blood and looking towards the camera. More exposition, and them boom, the movie is over - no resolution!

Toad roads reminded me of Only Revolutions by Mark Z Danielewski. The is a experimental epic poem about two 16 year old characters and their vibrant and tragic romantic revolution. The book is something you have to see and open to conceptualize. The book is 365 pages long, with 365 words on every page, and starts from both ends. There's an indicator that marks very 8 pages, the idea is that you read 8 pages on one side, flip the book over, and read 8 pages on the other side. Also on the inner margin is a list of historical events. The implication here suggest a parallel between Sam and Halley and historical revolutions. It is as if Sam and Hailey are more then just dancing through history, but lost in the dialectical swaying of events but never making their mark on history themselves. I'd like to argue that Toad Road and Only Revolution are both failed revolutions.
Only Revolutions concurrently tells Sam and Hailey's story by through narrative flipping and juxtaposition.. If Every set of segments in the book that Hailey is in Sam is also in but while they may be sharing the same space they aren't sharing the same time. For example, Sam might be describing the civil war, and Hallie might be describing the 60's. This parrell time warp is ongoing except for a couple chapters in the middle, where Sam and Hallie are in the same place at the same time. During these chapters they the spacial and narrative gap closes and they describe the same scene in the same language. This is the instance of authentic mutual love, where their relationship developed into a common coupling of subjectivities. But this state does not las. The world is against their revolution, and as the book moves away from the middle of the book they drift apart until they end begins at the beginning. The suggestion here is to start the book again. As if love is falls in to a patter of a constant push and pull. Where a couple connects grows together and grows apart and so on. So, where is the failed revolution? The failure is in Sam and Hailey's inability to continue to create the commons. Hardt and Negri argue that there are two forms of corrupt love; identitarian love, and unification love:
Sam and Hailey's revolution failed because they did not create their love, but only mucked around in what they are ready are. In order to create love one must change in the direction of love. In the middle chapters while they are the most clear to read and absent abstracting language used through out the book, they are also the least vibrant. The middle narrative describes Same and Hailey working at a restaurant together. They slave away to make a living, and this cycle of work shows as much distance as connection.

Structurally Toad road begins at similar junction, yet ends in a very different place then Only Revolutions. We entered the story to find James percolating in a circle of friends unable to to connect to anyone in a real way. Suddenly Sara is in the story and instantly becomes something that James is kissing and fondling. But its all goo-goo eyes. Sexually charged their relationship is all passion and lacks significant growth.

Sara makes two choices in Toad Road. Both choices are moves to become relevant in James's universe. First, Sara (who at the beginning of the film did not use drugs) tells James that she would like to use drugs. James is adverse to the idea and second guesses her. This second guessing is continued through out the film in response to every move she makes to grow closer to James. The second is Sara's acceptance of James unspoken challenge to be more adventurous (to be more like him) and to take a walk on the Toad Road.

The dialectic here between James's resistance to Sara's advancement and Sarah's pursuing of James is demonstrates a deadlock. Ultimately the film ends the tension by removing Sara from the film. After James returns home his community of friends has evaporated. The authority suspected him wrong doing. Confused and angry he snaps kicking the walls in his room. This over extended display of emotion is the only real demonstration James's feelings in the film. The outburst leaves us to wonder is if James is more upset by loosing his girlfriend or loosing his circle of friends. The scene calls into question James's motivation. Did he right want what he thought he wanted? Did he really want to be emotionally deflective toward Sara? Zizek argues about how we don't really want what we want, and when we do get what we want it is mentally crippling. We want to want what we want more then we want to get it.
What James wanted was to romantically connect with Sara. But, when he lost the opportunity to fully realize his feelings for Sarah he got what what his behavior suggested he wanted.

In Toad Road, James and Sara needed to be in love at the the same time. James's inability to be real with Sara also prevented him from being real with himself. If James was able to see the meaning in Sara's actions maybe he would have ran way with her instead of going on some acid trip through the woods path to hell? Where is your sense, man?

One of the strange and sad facts about this movie is that the actress that played Sara (Sarah Anne Jones) died of a drug overdoes shortly after the movie was released.
Antonio Negri Commonwealth film criticism horror love Michael Hardt Only Revolutions psychoanalysis romance Slavjo Zizek Toad Road twilight