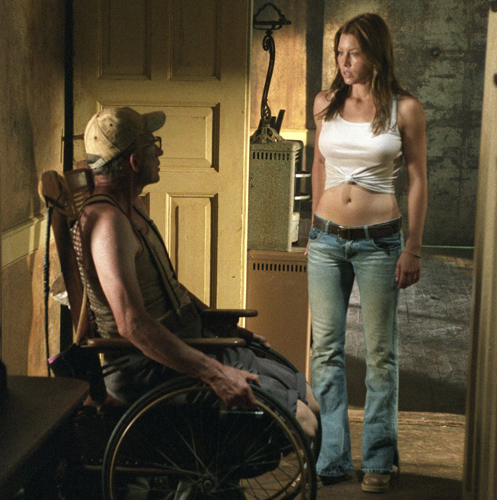 Texas Chainsaw Massacre was at the near of the post-9/11 wave of ultra-violent movies that echo the terrors that were beginning to escalate (or rather become more public) the sense of violence and dread that US soldiers brought to Iraq and Afghanistan. Eventually this post modern abysmal dread would enter into some safer genres like superhero movies. I'm thinking about shift between the first, second and third Batman movies. The first was dark, yes, but it only coasted on the edge of nightmares. Joker brought full on chaotic-anarchy, and Bane tricked everyone into thinking that there was some over arching ideology, when the real movement was to enter nihilism head on.

I see a similar pattern, rising out of the Texas Chainsaw Massacre (2003), Texas Chainsaw Massacre: The Beginning (2006), and Texas Chainsaw 3d. Through these films the amazing sets and sense of dread remain intact. And the creepy cast of characters still retain their iconic looks, and patterns. Leatherface wears faces resonates with the original aesthetic. Screaming ladies chased by chainsaw weilding monsters keep the same pitch. What changes is the development of the final girl throughout these films. In Texas Chainsaw Jessica Biel plays a too pretty girl that seems to be thrown into the plot just to get her tee-shirt wet. She struggles through the narrative and connects the dots. The movie is visually more rich with darkness, and while there isn't any real sense that Jessica Biel is any real danger from her pseudo baby sitter Mr Leather Face. There is still a sense of intensity and frantic scramble. All the while dark, there is an all too strong sense of hope in Jessica that is uncanny for a horror film. I mean I got the sense that she wouldn't really be in danger as soon I noticed how the camera painted her sweaty body. She simply had the shape of some kind superheroes at the beginning of her descent into hell. In a very real sense, I'd argue this is how the public felt about our invasion of Afghanistan. Yes, it's a dirty business. But we are pretty Americans, and we can do the dirty work without soiling our ego.

After Abu Ghraib, the filmic roads were paved in the intestines of a shattered patriotic innocence. The dead cat was out of the bag. America didn't give a crap who knew that they fought a war on terrorism with terrorism. In 2006 Texas Chainsaw Massacre: The Beginning hit the theaters. The film turned up the sense of intensity, and none of the characters felt safe. What I find particularly interesting is the depiction of leather face's birth on to the floor of a meat packing plant. Leather face, like the US government was not afraid to use rhetoric that externalized blame for their behavior on past traumas. Both narratives paint the picture that they are powerless aggressors trapped in reactionary conservative politics. I'm reminded of a child on a playground who explained to an adult that he punched some kid because the behaviors of the victim made them do it. That's bad logic. Causality doesn't work that way. The root here is simpler and insidious. The aggression of Leatherface and Bush II is rooted in a sense of enjoyment and entitlement one has in protecting something unnecessarily. 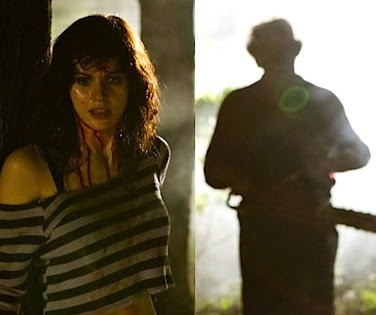 With Obama comes a mass production of war drones, and image of war where "they" die and we don't. Now Obama is in office, deporting more immigrants than Bush, extending and deepening the war of on terrorism and so on. The difference between Obama (and Leatherface 3d) and the monster he replaced, is that Obama (and Leather face 3d) is somehow more likable for acting just like, and sometimes worse than the previous reigning monster. There something weirdly true about this. I'm thinking about the end of Leatherface where the Final Girl sides with the monster and decides to keep him as a pet. There is a sense in which that the Nobel peace prize is a kinda collar that the international community is keeping on a cute and cuddly monster. Enter the strange film Texas Chainsaw 3d. The movie about a massacre without a massacre. Believe you me, I'm not first or the last person to say I felt ripped by a trailer for a film that has an angry and a grunting leather face stomping through a fairground at night. The foreshadowed lie would have made for a much darker film. But what we are left with a kind of decaf coffee version of what could have been. There are still some interesting depths in this flick. Consider the presidential comparison.

I'll leave you with Dr. West