Rob Zombie's Halloween begins with Michael located in a series of dysfunctional social systems. His family is radically dysfunctional. His parents are floating through a failed marriage and his sister is hypersexualized and acting out. Micahel is caught in the middle and he is seeking to fit in and find recognition. At school bully's pick on him about one other than Halloween that he cares about; his mother.

When a dead cat is found in his locker, his mother is called into the office. This is the first instance where she begins to see Michael's darker side. His mother insight into his extracurricular actives challenges the potential to received continued love from his mother. Enraged he takes out his frustrations on bully that picked on him.

Upon being institutionalized Michael is relatively stable, until Dr. Loomis abandons moving therapy. Frustrated, and with without the skills to express his yearnings leads to Michael forks a nurse. Forking the nurse worked on two levels, it allowed him to seek find reparations for the nurses teasing, and refocus Dr. Loomis's attention on Michael. This pushes his mother to realize that her son isn't who she thought he was.

A decade and a half later, Michael has only three people in his life; his sister, Dr. Loomis and one of the caretakers of the asylum. Dr. Loomis again tells Michael that he is going to abandon therapy with him, which is followed by a scene where their caretaker who at this point was the last remaining person that recognizes Michael as human, turns on him by becoming a bystander for the verbal abuse of a second caretaker. Later that night the bully caretaker brings his cousin along with him to abuse a woman in Michael's room. At this point Michael is spiritually being incorporated into the sexualized threat of the originally bully that insulted his mother. Michael snaps, and with nothing left to see him in the asylum goes in search of his sister's recognition.

What is Michael hoping to gain by reconnecting with his sister? Good question. I have no idea. But what I do find interesting is that Laurie Strode's relationships with others, manipulative in a very different way than the ones Michael had in his childhood. They manipulate her on a more subtle level, pushing her to agree with them. Using Laurie's need to be liked against her.


Masks.-- There are women who, however you may search them, prove to have no content but are purely masks. The man who associates with such almost spectral, necessarily unsatisfied beings are to be commiserated with, yet it is precisely they who are able to arouse the desire of the man most strongly: he seeks for her soul -- and goes on seeking. (from Nietzsche's Human, all too Human, s.405, R.J. Hollingdale transl.)

What mask is Laurie wearing? Laurie is introduced to us in a scene where she violates a donut in front of her mother. What is strange about this scene is the obvious cynical distancing from the first scene in the movie. Laurie is sexualized in a raw but naive way. It is almost as if she only knows enough about the subject to bug her parents and relate to her friends. Laurie is caught in a superficial network of relationships where she is reacting to them rather than relating to them. Nietzsche argued that the meaning of life is a set of perpetually shifting masks, that just when we think we get to the bottom of things there is another mask. 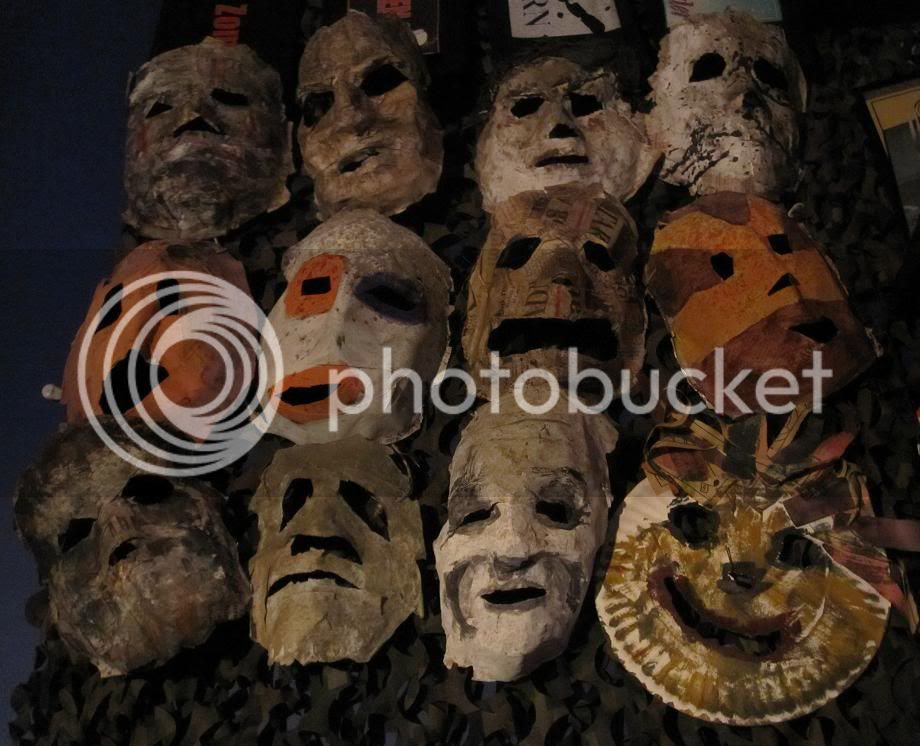 What does this mean for Michael, who is totalized by his mask? It is almost as if the endless series of masks that Michael created was an attempt to recreate his original mask. The one that allowed him to liberate his anger. Both are wearing masks that juxtapose a sharp contrast. Laurie's mask of social conformity, while Michale wears a mask of social deformity. Where Laurie's mask is a shifting set of social disguises that help her navigate the social terrain, Michael has found and establish his identity in the mask. While, Laurie's mask establishes her as she is what she is not, Michael's mask establishes himself as he is.

At bottom both masks are hiding the same thing. The inaccessibility of the Truth of identity. We can never verify that we are what we are for our self or others. There is no rule that can measure the intersubjective space. Michael's certitude only reflects his psychosis and his incapacity to see that there is no truth in the relation between signifier and signified. Laurie shifting shows us her neurosis and her shifting desire to please others.