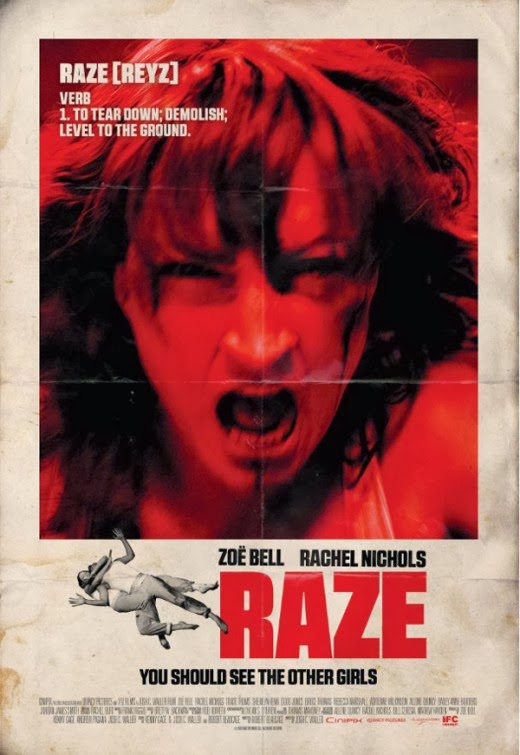 Raze has a simple plot. A group of bad ass women is locked in an underground facility and forced to fight to the death to 'protect' their loved ones who are being held hostage by the bad guys. Between fight scenes we are introduced to Sabrina (Zoe Bell) and the other fighters. The fights are brutal. These are not chick fights. They are “I'm going to kill your face” fights. The film portrays the fight scenes lacking the sexualized “mud wrestling" vibe that traditionally is embedded in fights between women. The fights are not spectacle for the easily aroused but fights to the death. I have seen a whole slew of crazy and ridiculous things happen to the female body in a horror film. I think I cringed and squealed more during Raze per-square filmage then I have with any film since Martyrs.
Why was viewing the fight scenes in Raze intense? On the one hand, they were simple. The fights were not Jackie Chan ballets. They were quick and sharp. Fingers to the eyeballs. Choking. Kicking knees the wrong way. Break something fast and win, fights. On the other hand, the style of the fights is typically represented by men (I'm thinking the wet slapping meat fists in Fight Club). Raze, rather than using buffed up and chemically supplemented action dudes, uses normal woman. Working class women. Wife's and daughters.

Raze pummels and breaks the female body to produce a unique horror. The uniqueness of life or death fights between women calls into question a deeply rooted aspect of misogynism which women as warriors. The global history has relegated women to the sidelines of a war, while men have sacrificed their lives for the nation. Pitting woman against each other as warriors challenges the notion that see women as pathetic creatures under the protection of men, and the political use of the female body. What then, is the female body to horror? Is she just a rag doll to be cut, bruised beaten chased and killed or is she representative of and a challenge to white male hegemony? 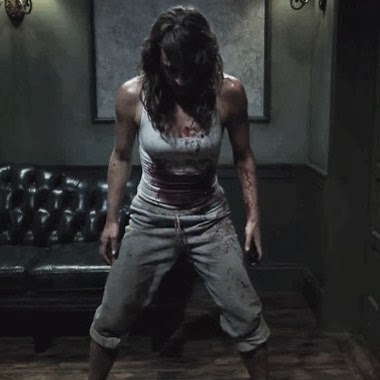 There is a sense in which it is generally easier to empathize with woman's pain rather than man's pain. Part of this is because it's more socially normative for women to be publicly pained creatures rather than men. Men are trained that hiding their pain from the public gaze as an act of dignity. The sexist stereotypes reinforce the idea that the female body is a weak and flimsy thing and can only be successful at being fully whole with help of someone. These normalizing ideologies all reinforce these concepts of female frailty by selectively showing types of femininity in film that conform to the stereotype of victimhood. By highlighting victimhood and hiding warriorhood film. TV  acculturates and regulates culture to conform ways of thinking and being to the dominate narrative.

Evolutionarily, there is a very real difference between men and women. Men and women, of course, have differing appendages, hormonal patters, genetic sequencing provide men and woman with the survival scripts. But the biological/sexual difference that is politically stretched across the female body is not what produces the affect that wrenches our guts as she is being pulverized, or threatened with pulverization in horror. What produces our reaction are the gender discourses we take as normal. Boys play football. Girls are cheerleaders. Boys are warriors and women are baby factories. Before a film even starts the female body means something to us. Our ideology guides our thought as it guides our empathy. Whatever ideological mix we have shapes the mapping of the chemicals that empathize us to the female body as it is tenderized or dismembered in a film. The way in which we psychologically and cognitively experience trauma to the female body is ideologically guided. This guiding spins out the narrative we used to frame interpretations. If our schemata is sexist, not only will we think like a sexist we will feel our sexism. This is where Raze excels by forcing the viewer to confront the framework they used empathize with the female body. We see the hard fist crashing into the supple-frail-hottie and affect happens. We relationalize ourselves to the bodies on screen.

Freud argued in his text "a child is being beaten" that when we see someone getting hurt something in us auto-identifies with the victims pain in such a way that we feel it as if it is our own. Horror bets on this phenomenon more than most media. The horror we experience is the empathy our biology and ideology compels upon the viewer. For me broken fingers anything with fingernails or teeth produce a cringing effect where I feel an empathy induced phantom pain. Before I can even conceptualized the horror my body reacts. Evolutionary psychology would explain this as an adaption of social preservation. My genes gain a substantial return on the benefits I receive from having quality social relationships that raise my capacity to reproduce.

The female body is trapped in language and meaning that combine to shape and produce our understanding of the world. The meanings we auto-associate with the female body are deep structuring mechanisms to understanding our existential place in society. When trauma comes not only do we feel the pain of the female body, and recreate it in ourselves, but it also traumatizes us (just a little, because we know its just a movie) and kicks the seemly sturdy columns that structure our relationships with ourselves. 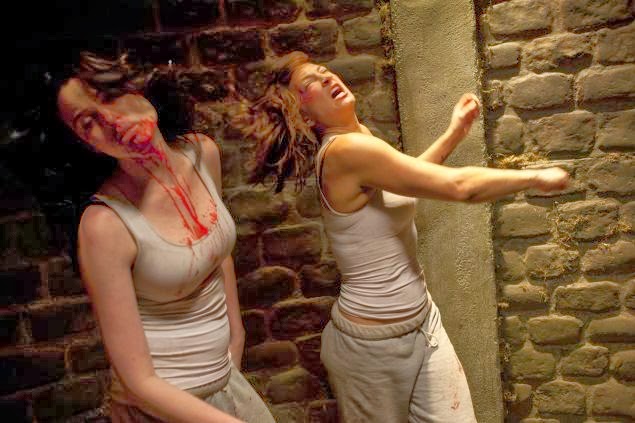 Martyrs, another film like Raze that experiments with the female body and empathy. The film confronts the viewer with a series of brutal pummeling of a woman. The viewer is trapped as the character is in a in these beating scenes. Forced to confront the horror of their empathy. Raze and Martyrs intersect on this simple point to show challenge our capacity and forcefully push our capacity to empathize across gender. In Martyrs and Raze are no weapons and no masked dude stalking women across suburbia. The female body and the viewer while watching these films are here pulverized in such a way where they transcend the limitations of victimhood.

There is a sense in which horror films have the opposite impact that the religious right would lead us to believe. Horror, here, educates and tests our empathy. Teaching us how to relate to the female experience, and expand our ideology in regards to what it means to be a woman.