One of the plethora of things that Night of the Living dead is famous for is casting an African American male in a leading and non-submissive role. While this film did not end racism, it did become a foothold for filmic justice. I did not realize how deep Night of the Living dead subverted the white hegemonic narrative until I read a couple passages in Joe Kane's text describing Duane Jones's experience on the set:

Let's chainsaw into this. 1968 was a pretty wild year for the world. Everything looked like it was falling apart. MLK was assassinated. Peace groups fed up with the lack of political progress gave birth to violence and armed groups. People were setting themselves on fire. Mao Zedong was stirring the pot in China. Environmentalist groups were running amok in the United States. Peaceful protesters were radicalizing a new rage was building. Walls were breaking. The US Ad industry was dominating the minds of the consumer, and TV's were becoming invading our homes and leisure time. Vietnam's blood splattered across every home in the American middle class. Everywhere was nuts. And then the Zombies came.

Hegemony is a great concept, although, it is a bit confusing because several philosophers have put their spin on it. Essentially Hegemony is a discretion of a process where something new enters into a socio-cultural-political equation. A new element. Some times it is a snippet some times its huge. So for instance, up to 1960 zombies in horror film had a very different vibe, and each movie puts its own spin on it. Many were voodoo zombies, somewhere supernatural, or radioactive. Zombie as an idea was a fragmented concept that floated through American culture vaguely. That is, to what Night of the Living Dead changed and sutured the meaning of the word zombie. Night of the Living Dead, works like this:
But what happened afterwards? George Romero continued his inclusionary casting attitude in his upcoming films, and because Dawn of the Dead and the concept of having a black male lead became fiscally feasible. Enter the Token Black character shoved into a movie in order to hit profit margins. I hear a question in the wind. But wasn't Duane Jones's role in the Night Of The Living dead a token character?

The answer is No.

The original role of Ben was written for a white male lead. Duane, an intelligent and dignified dude, knew the character's dialog need to be rewritten so he rewrote a majority of the dialog for his character. The difference here is huge. It's one thing to used by film makers to make money, it is quite another to collaborate together on a joint project. Let me provide you with an example;


"Duane simply refused to do the role as it was written. As I recall, I believe that Duane himself upgraded his own dialogue to reflect how he felt about the character should present himself." A look at the original script demonstrated the difference. When white Ben first arrives at the house, he says to Barbara: "Don't you mind the creep outside. I can handle him. There's probably going to be lots more of 'em. Soons they fin' out about us. Ahm outa gas. Them pumps over there is locked. Is there food here? Ah get us some grub. Then we beat 'em off and skedaddle. Ah guess you putzed with the phone."

As translated by Duane Jones, The same Speech goes: "Don't worry about him. I can handle him. Probably be a whole lot more  of them when they find out about us. The truck is out of gas. The pump out here is locked-is there a key? We can try to get out of her if we get some gas. Is there a key? (Ben tries the phone) 'Supose you've tried this. I'll see if I can find some food." (Source)

The difference between the white Ben and black Ben are huge, we are not talking about one scene with one character. But a rewriting of the dialog by the actor who had the most amount of lines and time on screen. What would be interesting to know is how much he was paid for his role compared to the other characters in the film (I googled. No luck. If anyone finds something send me a link.)
Racial Preformativity

Preformativity is a concept (kinda like hegemony) that seeks to describe the production, creation, constitution, regulation, and norming of subjectivities and bodies. In other words, and in the context of Night of the Living Dead, Duane is not only preforming Ben, he is also preforming racially. I hear someone shout, "Are you saying he is acting black?" Yes, let me explain. The material, behavior and narratives that makes up the source for the performance of race is relational. What this means is two fold. We are born into this world that has preformed racialized and culturalized spot allocated for this. Part of our culture is already on the table, and we are born into a family that culturalizes us. This is not to say that there are not genetic traits are passed down from our parents, but that the part of us that is our racial/cultural identity is fundamentally a relationship between ourselves and how we fit into, intersect and clash with a set of narratives and cultural behaviors. At root is about personal and social intelligibility. It is about how you develop an identity among others, and how they identify you.

1968 America, like the years before it, and up till this day is still a rich white dominated society. America has a black president does not change the fact that schools are more segregated today, then they were before MLK got involved (source). I'd argue the case is the same thing for movies, specifically horror. Lets not forget the bizarre public outrage over Rue (a character in the Hunger Games book and movie) being black.

One last point, that doesn't have to do with everything else above. While I was watching the Night of the Living Dead today, I was thinking about the Id, Ego, and Super Ego analogy I made in a previous post about Psycho and Carrie. So what is interesting is that the Ego is overpopulated, and ravenous. The second floor is too scary to spend more than a couple seconds, and the basement is full of fear, paranoia, racism and a zombie. The ego is full of tension that gets flooded half way through the film with the ego, all while the forces are surrounding the strongest forces of the ego (mostly Ben). Part of how I understand this movie is an analogy for the Ad industry, who at the slightest sight of resistance finds a way to take your weapons of struggle and capitalize them. I'm thinking about Jeans. Jean's used to part of the uniform for the industrial working class. They were also cheap, so the hippies started wearing them in mass. The jean companies swooped in and took the jeans from what they were then to what they are today. 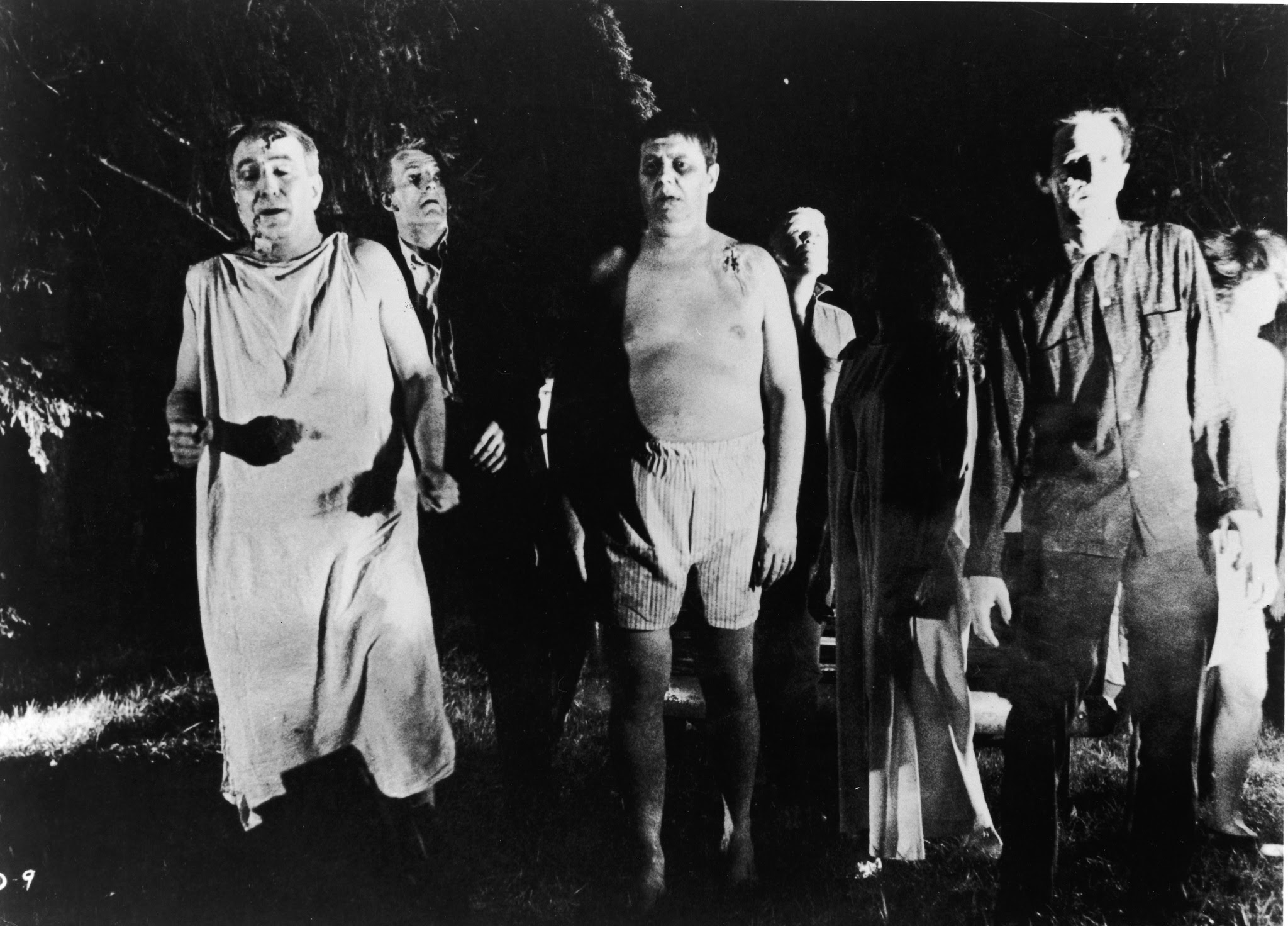